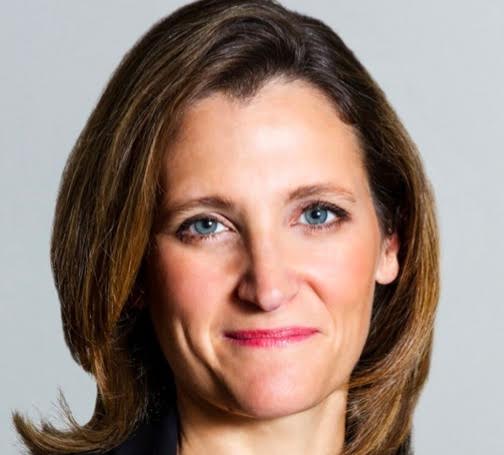 Rotary’s Eglinton Club is glad to invite you to its special event intituled Canada’s Current Role in Foreign Affairs which will take place on June 29th in Toronto Lawn Tennis Club at 6:30 pm.

For that unique occasion, the Eglinton Club will have the participation of Hon Crystia Freeland, actual Foreign Affairs’ Minister.

An esteemed journalist and author, Ms. Freeland was born in Peace River, Alberta. She received her undergraduate degree from Harvard University before continuing her studies on a Rhodes Scholarship at the University of Oxford.

In 2010, Ms. Freeland joined Canadian-owned Thomson Reuters. She was a managing director of the company and editor of Consumer News when she decided to return home and enter politics.

She has written two books: Sale of the Century: The Inside Story of the Second Russian Revolution (2000) and Plutocrats: The Rise of the New Global Super-Rich and the Fall of Everyone Else (2012).‎ Plutocrats is an international best-seller and won the Lionel Gelber Prize and National Business Book Award. In 2013, Ms. Freeland gave a TED Talk about global income inequality, based on the issues dealt with in Plutocrats. It has been viewed almost two million times.