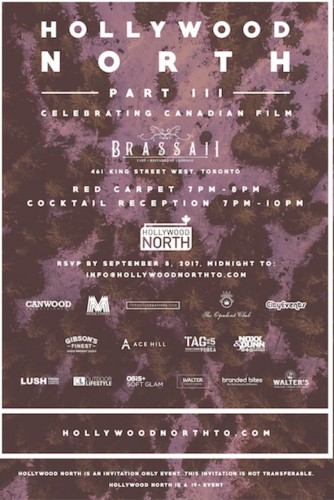 Hollywood North is an annual celebration of Canadian Film and VIP gifting event just down the street from the TIFF Lightbox.

One of the last true VIP festival experiences, thanks to our wonderful group of partners and generous sponsors, Hollywood North guests are never left wanting.

This was a networking event celebrating Canadian talent in the world of film, and all that it encompasses ranging from fashion, music, innovation, and technology, anything that goes into film production. We’ve had athletes, Juno award winners, CEO’s of production companies, to Oscar nominees in attendance in previous years, so this was a highly anticipated event.

Supported by:  CityEvents, The Opulent Club

There is video from last year’s live broadcast as well on Distractional TV, and we have had several hits on it on social media, from our live feed.  https://vimeo.com/151684149